Baking School by Bread Ahead

Learn to bake the Borough Market way and demystify the classics

Getting ahead in business isn’t all about finding the formula for success and keeping it to yourself. That may be especially true in baking, an industry in which few things are really, truly original and a profession that’s journey of exploring infinite innovations on a finite number of pivotal principles. The Bread Ahead Bakery, founded in 2013 in Borough Market by Matthew Jones, is a success story that expands its reach through sharing. One expression of the bakery’s generosity with experience, knowledge and enthusiasm is its Baking School, in place since 2014, another is its book – simply titled, Baking School.

Graduates of the real Baking School leave their premises having been taught by UK baking industry leading lights, such as Lance Gardner (ex-Harrods), with armfuls of replica Bread Ahead doughnuts. Bread Ahead’s Justin Gellatly’s doughnuts, described by various as ‘pillows of joy’ , are one reason that the bakery has achieved notoriety, although the broad range of products hitting the Borough Market stall, and counter tops of sister branches in Soho and Chelsea, portray a depth of knowledge and unending curiosity. For anyone picking up the Baking School book, they’ll be pleased to find the knowledge and curiosity extends to the pages within.

Food and travel combined make the modern world go round, so the division of the book into Bread Ahead staples – their house sourdough, a colossal Cathedral Loaf and croissants – and international, largely European bakes, ensure that bakers at all levels can act as tourists from the comfort of their own kitchens. A robust Russian rye bread, pretzels inspired by the deli counters of New York and Czech Koláče are all featured in a compendium of intriguing bakes begging to be trialled.

The result? Angels singing. Angels with minds as dirty as their custard-covered faces. Make these doughnuts and life changes, forever.

It’s not hard to make a loaf of bread. Demystifying it is something that The Bread Ahead team has tackled head on, yet perhaps in more subtle ways than they had intended. Taking a new baker through the steps of making a sourdough loaf could mean extensive notes, a serious level of hand holding, thermometers, humidity readings, pencil marks on bowls and more. Not for the Gellatly’s and Jones, theirs is an introduction to fearlessness and intuition. After all, what’s the worst that can happen?

There are pernickety elements to their writing, especially when it comes to doughnuts, but the fact that so many recipes aren’t remotely nuanced – if they wrote about a bulk ferment or fold on one page, they copy it word-for-word in every other recipe requiring a bulk ferment or fold – is refreshingly straightforward, if unusually robotic. An introduction, explaining all about starters, firm and wet, as well as illustrated techniques to become familiar with, sets the scene for pretty much everything that will unfold over the remaining 300 plus pages. Baking really is that easy, you just jump in and marry common sense with their wholehearted encouragement.

Hoping that it really can be that simple, some Bread Ahead staples have been put to the test, using a little experience, gung-ho attitude and near-faithful attention to the Gellatlys’ and Jones’ recipes.

The Bread Ahead Sourdough

L-R: With no image of the signature sourdough in the book, there’s only the fact it looked a decent loaf to prove success.

Out of the blue arrives a revelation – the 100% rye sourdough starter, for all forms of sourdough. It’s a more friendly, stable and lower-maintenance alternative to white flour starters. Why did nobody tell us before? The sourdough recipe from Bread Ahead calls for a stiff leaven, prepared the day prior to baking, using this robust and well-behaved starter. After a night of fermentation, dissolving the starter in water, mixing in strong white, rye and wholemeal flours commences before jumping in with Bread Ahead’s ‘poised like a panther’, grab-and-tear kneading method. The relationship between dough and salt is an illuminating topic in the Bakery School book, explaining the chemical as well as flavour contribution of good-quality, fine Sea Salt. At the first kneading stage, salt is absent, brought in only after the first rest, followed soon after by a series of four folds, shaping and popping in the fridge for a sleep before baking in a Dutch Oven. How much does it have to rise? No idea, there’s no real instruction. Any spring test? No, nothing like that. Does the recipe suffer because of it? No, you get a nice sourdough loaf out of it, whatever you seem to do. A couple of variations, leaving the dough to warm up for an hour on time, another time baking straight from the fridge, produced good, barely variable, results. A baker taking loaves to market will look for improvements, but for a home baker – especially a beginner – it’s a hugely encouraging outcome.

L-R: A first attempt at the Bread Ahead croissant and the neater versions to be found the professionals’ counter.

Why do we fear baking croissants? Probably because we’re taught to, with disastrous first attempts in many bakers’ pasts and expert recipes describing week-long processes and ‘encouraging’ words for when, inevitably, it all goes wrong. Not so with Baking School. A recipe using fresh yeast, shop-bought ingredients (the moisture content of butter? Not mentioned) and simple, easy-to-follow, relatively stress-free steps. Getting it right is, of course, important. Responding to the recipe to ensure the butter and dough are treated correctly is the route to success, but Baking School’s rhythmic writing style means there are no fussy variations, no lofty opinions or surprises if it’s been properly read. There are, as ever, some dubiously vague descriptions (your shaped croissants should ‘wobble’ when proved – are we talking skyscraper-in-an-earthquake wobble here or firm jelly wobble?), but the most important thing for the authors is that the reader has fun trying and working some things out for themselves. When it works out, as the test croissants did, satisfyingly so, then it’s more than fun, it’s a sense of achievement on par with the fastest race run, the highest mountain climbed and the naughtiest of children tamed.

L-R: The inaccurately prepared and fried doughnut and the model version. Once tasted, never, ever forgotten.

The sticky, relatively unglamorous doughnut has had a modern transformation, with any artisan bakery worth its yeast coming up with wonderful, new creations. The Bread Ahead Bakery has, literally, made an industry of innovative doughnut frying and filling and the reader is defied to flick past the Salted Caramel Custard Doughnut and not put it straight to the top of their ‘to bake’ list. Baking School is, perhaps rightly, fussy about the doughnut recipe. The dough requires some chilling. These test doughnuts, out of necessity, missed that bit out. The doughnuts need to be fried at exactly 180°C, yet the accuracy of the oil in the test wasn’t as rigorous. All of these elements could catch a newbie out terribly, but as the doughnuts weren’t overcooked or undercooked, fantastically light and with a delicate flavour to simply carry the boldness of the filling, perhaps the military instructions can be relaxed now and again without the world ending. The filling though, is where the magic happens. Melted caster sugar spits and splutters as milk hits the pan, slowly melting to a brown, sugary liquor, the egg yolks and flour thickening the custard, smattered with a healthy pinch of salt, before cooling and mixing with whipped cream. The result? Angels singing. Angels with minds as dirty as their custard-covered faces. Make these doughnuts and life changes, forever. 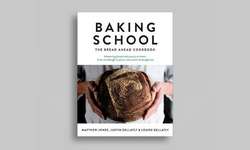